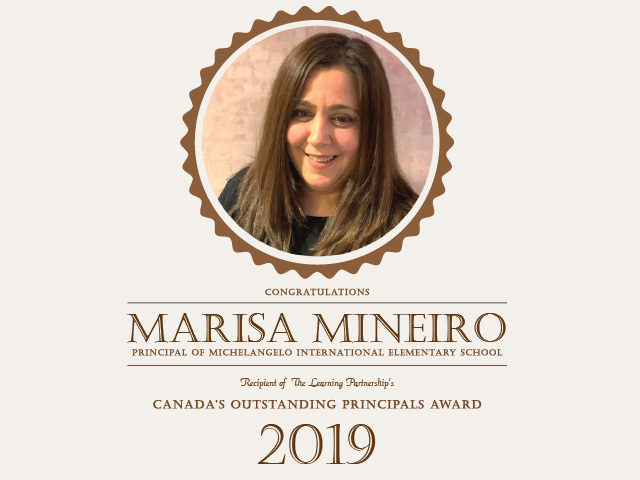 While Michelangelo International Elementary School in RDP might be tucked away at the eastern edge of Montreal, Principal Marisa Mineiro will soon be thrust into the national spotlight as she was recently named as one of Canada’s Outstanding Principals. The announcement was made by the Learning Partnership.

“I’m very honoured, but I cannot take all the credit,” said Ms. Mineiro. “It’s a team effort here at Michelangelo International Elementary School. I did not do this on my own.”

As a principal, she puts a lot of emphasis in ensuring that the staff at Michelangelo feel empowered. As such, it is a direct credit to this that her nomination came from resource teacher and staff assistant Stephanie Fuoco.

“We work in collaboration for the benefit of our school and the students.”

“We work as a team. I make the decisions when I need to, but I try to include the staff in the process,” she added. “We work in collaboration for the benefit of our school and the students.”

Another factor for Ms. Mineiro is developing a strong relationship with her community at large and her parent body, both key elements in ensuring that she maintains a healthy and happy school environment.

With her selection, Ms. Mineiro joins an exclusive club that numbers just over 500 members. In addition to an awards ceremony in Toronto,  Ms. Mineiro will be enrolled in an executive leadership training program at the University of Toronto’s Rotman School of Management as well as other professional development courses.

More About The Learning Partnership

The Learning Partnership is a Canadian charity that prepares students to thrive in a diverse, connected and changing world. It celebrates education excellence, leveraging the best thinking from educators, business, and government to deliver experiential programs for students that cultivate entrepreneurial thinking and support social emotional learning. Since 1993, it has been helping build the foundations for students to solve tomorrow’s challenges.