Clouded in the mists of time are the beginnings of Cote St. Antoine Academy (1895), the first formal educational center in Westmount.

When Westmount High School on Academy Road was opened in 1914, the 1895 building, changed its name to "Argyle school"

Clouded in the mists of time are the beginnings of Cote St. Antoine Academy (1895), the first formal educational center in Westmount. Primary and secondary grades were taught at this facility. There, almost seven hundred students of both sexes were taught the basics; English courses were simple classes of reading, writing and spelling. French was touched upon because basic vocabulary and writing skills were essential for interaction with the French community in Montreal. More sophisticated courses existed, but were not taught in that building; in fact, more specialized courses were taught on a volunteer basis at the YMCA in the evenings. As time progressed, other school were opened to cope with the increased population. These schools were more modern, and thus, the courses available were up-dated as well. Mr. Robertson, the Principal of this early school, now referred to as Westmount Academy, was pleased that "Westmount Commissioners were shifting emphasis from letters to life". Manual training and physical education were introduced, and this shift culminated in the construction, in 1914, of a new Westmount Academy, on Academy Road, which included a large gymnasium and auditorium. The first enrollment ledger reveals that girls and boys enrolled together.

However, in class they were segregated. At the end of the twenties, the list of courses had expanded considerably. As well as Basic English, French, and arithmetic courses, the curriculum expanded to allow history, geography, and other subjects to gain prominence in public education. Girls were still segregated from the boys, and this gender gap extended so far that girls were not allowed to take the manual training course, and boys were prevented from taking drawing. Throughout these decades, grade promotion was in effect. By this method, students were advanced to the next grade provided that they had acquired a mark of fifty or higher in every single course!

In 1935 - 1936, the first commercial programs were made available with different courses for boys and girls; as well, the first co-ed classes were introduced. Boys were given courses that you might find in a vocational school now, such as bookkeeping and metalwork, and girls were given courses more geared toward home-making, such as cooking and sewing. Also in this time period, basic courses were very different. English was separated into four classes composition.

Throughout the years Westmount High School has had many different faces. In 1873, the first Protestant school in what is now Westmount was founded in a small rented frame house on the corner of Clarke and Cote St.Antoine. When it first opened, its principal, and presumably its only teacher, was Ms. Turnbull. It was called, simply, House. In 1875, it was realized that the House on Clark Street was not big enough to accommodate the growing number of students. A house was purchased on the north end of Stanton Street where the firehouse now stands. The first principal was Mr. John Proctor. In 1885 a new school was built on adjoining property on Stanton Street. It was called the Stanton Street School. Its first principal was the Rev. E. A. W. King. In 1891 its name was changed to Cote St. Antoine Academy(see picture above). It was sold to the city in 1895 for $16,500, and was later transformed into what is now the Police and Fire Stations. During this period, branch schools were opened on Victoria Avenue (1892) and Elm Hall (1893). These were later closed in 1895 with the construction of the new Cote St.Antoine Academy, later renamed Westmount Academy.

In 1895, Cote St. Antoine Academy was opened on the corner of Argyle and Cote St. Antoine, where Selwyn House now stands, and the name was later changed to Westmount Academy when the first principal was Mr. J. A. Nicholson. It was originally an all-grade school and was overflowing in 1896 with 681 pupils; this led to the construction of Kings, Queens and Roslyn schools to relieve the pressure on the primary grades. When Westmount High School on Academy Road was opened in 1914, the 1895 building, mentioned above, changed its name to "Argyle school" and housed only primary and intermediate grades. The first principal of that early Westmount School was Mr. A. W. Seaman.

From 1927, grave concern was felt for the structural strength of this old building and, consequently, it was torn down in 1934 to make way for the new structure now standing on Cote St. Antoine and Argyle. In 1935, a new school was built on that site and was called Westmount Junior High School. Westmount High School on Academy Road was (currently Westmount Park School) was opened in September 1914 at a cost of approximately $480,000, housing grades 7 to 11 inclusive. Grade 12 was later introduced in 1930 and then dropped in 1951. An addition was made to the West end of the school in 1929 and to the East end in 1931. In 1940, as a result of petitions from the Home and School associations transferred to Westmount High School on Argyle and Cote St. Antoine (currently Selwyn House), where a new High School had been erected once the old Argyle school had been torn down. From 1940 this school on Academy Road school was known as Westmount Intermediate School; then in 1943 it became Westmount Junior High School, and is now called Westmount Park Elementary School.

The center part of this building was opened in September 1914 at a total cost of approximately $480,000 as Westmount High School housing grades 7-11 inclusive. It's first principal was Mr. R. E. Howe. In 1929 an addition was completed at the west end of the school for $86,000 and 2 years later an addition on the east end was completed a cost of $142,000. Grade 12 was started in 1930. This school on academy road after 1940 was initially known as the Westmount Intermediate School and in 1943 the name was changed to Westmount Junior High School. It's first principal in its new role was Mr. C. H. Savage. In 1940 as a result of petitions submitted by the Home and School Associations of Kings and Roslyn, this school housed grades 7, 8, and 9 only, and grades 10, 11, and 12 were transferred to the Argyle School, which thereupon became the High School. At this date, plans are underway to convert this school to an elementary school called Westmount Park School to house the present population of Kings and Queens Schools.

This school was completed and opened in 1935 at a cost of approximately $250,000 for land and buildings, following demolition of the old Westmount Academy, or as it was known at the time of demolition, the "Argyle School." It was opened originally as a Junior High School and became the Senior High School with grades 10, 11, 12 in 1940. Grade 12 was dropped in 1951. It continued as the Westmount High School until the Spring of 1961, when the new high school on St. Catherine Street was opened this school was sold to the Selwyn House Association. In 1961 this school on Argyle and Cote St. Antoine was sold to the Selwyn House association and is still Selwyn House School. In 1961, the new and current Westmount High School was opened on St. Catherine Street. This school was built to house 1,200 students, the estimated maximum requirement for the area. When it opened on September 6th 1961, 1,282 students were enrolled.

Since1961, the school has undergone numerous physical changes. In the 1970s several classrooms were enlarged to accommodate a Nursing Assistant program. The technical/vocational area underwent extensive alterations in the early 1980s providing space for the new I.T.T. program and small machines. The lowest enrolment since the present Westmount High School opened was experienced in 1989 with just under 300 students. In recent years, however, thanks to innovative academic programs, this number has increased to approximately 800 students, at present. The early Westmount High Schools admitted students only from the City of Westmount; since the open boundaries policy of the 1970s, the current Westmount High School 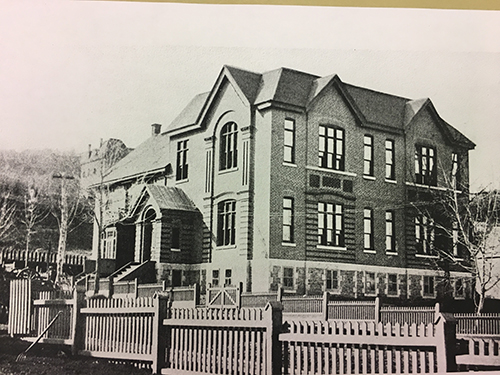 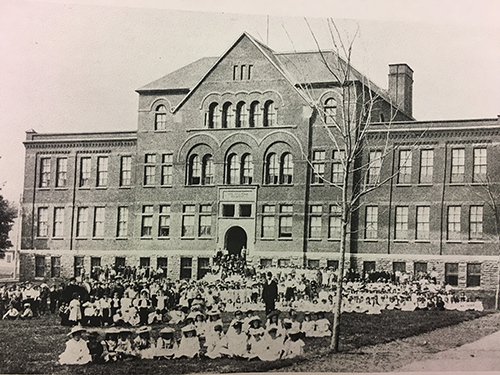 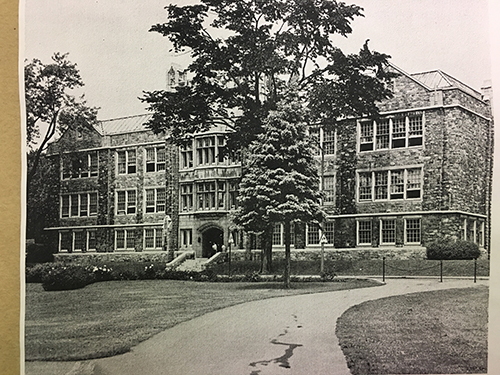 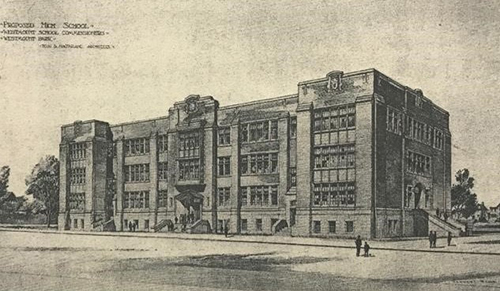 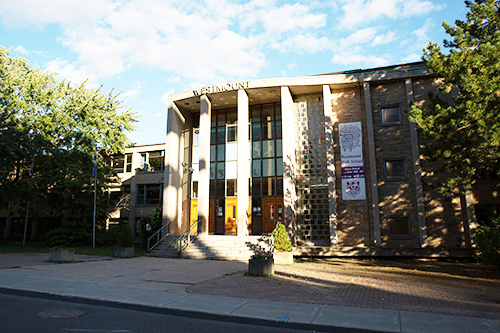