EMSB observed Remembrance Day in many creative ways this year 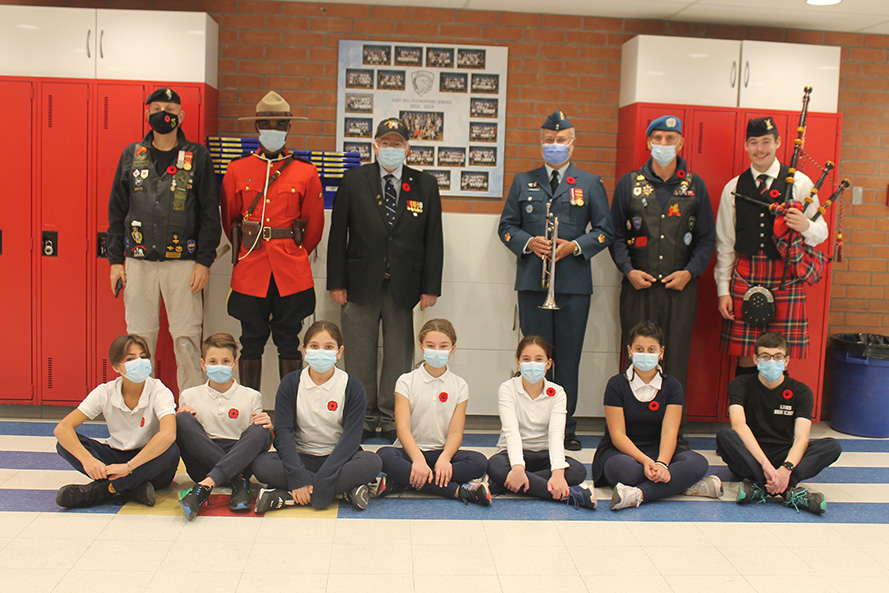 Traditionally, many EMSB schools conduct annual Remembrance Day ceremonies in general assemblies as a way to gather school communities together for a communal reflection. This year, many invited guest speakers to talk about their experiences in live streaming formats or make a live appearance for a moment of silence, and still others created opportunities for students to join in reflection exercises through writing or art in their classrooms. Many of the Remembrance Day reflection activities were led by the board’s Spiritual and Community Animators (SCAs).

“Remembrance Day provides an opportunity for us as an EMSB community to take time to remember those who have served Canada – past and present, at home and around the world, during times of war, conflict, and peace, and most recently during the Covid-19 pandemic,” said Danika Swanson, Spiritual and Community Animation Service Consultant for the  EMSB. “When we observe the two minutes of silence on November 11, we invite students to reflect on the peace that we enjoy today, as well as on the true nature of conflict, the realities of war and our ongoing responsibility to work for peace in our own communities. Through programing and activities, Spiritual and Community Animators also encourage a sense of gratitude to all of those people who serve and sacrifice to keep our country and our communities safe and well.”

Personnel at the board’s head office were invited to participate in a minute of silence on November 11 around 11 am. It formed part of a communal commemoration of Remembrance Day led by Ms. Swanson in a video co-created with the Marketing and Communications Department.

“Pass the Poppy II” continued in its second year, led by SCA Rocco Speranza. Marking 100 years as the symbol of Remembrance Day in Canada, the poppy was symbolically passed from person to person in a series of short video clips.

Pass the Poppy from EMSBTV on Vimeo.

In Rosemount, Vincent Massey Collegiate’s Spiritual and Community Animator Veronica D’Agata guided students in the creation of a garland of 100 poppies to mark the 100th anniversary of the poppy. The intercom brought the school together, allowing students to take part in a reflective ceremony by listening to a speech delivered by Ms. D’Agata, who spoke about the privilege of living in Canada, giving thanks to people who have defended the country and its values, and working together for peace. Student also listened to the Last Post, took a moment of silence and listened to grade 9 student Matteo Rossi recite In Flanders Fields over the intercom.

Many EMSB schools came together to participate in “360 in 60” on November 10, a live, virtual and interactive program whose objective was to provide a look at all facets of the Canadian Forces in 60 minutes. The program, designed by Spiritual and Community Animator Vince Lacroce and in its second year, brought together 34 schools. It was coordinated in collaboration with several other animators who brought in their schools: Ibrahim Abou Arab, Alie Cabelli, Veronica D’Agata, Linda Luca, Joseph Monachino, Elizabeth Pellicone, Mary Poullas and Danika Swanson.

A representative from five military units and the Montreal Holocaust Museum were invited to speak to different grades. They came from the Royal Canadian Hussars (Grades 4 and 5), the 2nd Field Artillery Regiment (Grade 7), the Royal Montreal Regiment (Grade 8), the Canadian Grenadier Guards (Grade 9), the 438 Tactical Helicopter Squadron (Grade 10) and HMCS Donnacona (Grade 11). There was also a session with the Montreal Holocaust Museum, whose representative helped facilitate a presentation by a survivor for Grade 6 students.

For 360 in 60, under the guidance of SCA Linda Luca, NDG’s Marymount Academy International students Mathéo Moran Verdule (Grade 8), Rowan Anglin (Grade 9) and Catherine Parisien (grade 10) spoke about the significance of Remembrance Day, introduced guests and explained some of the rituals including the minute of silence and the playing of the Last Post.

At Rosemount High School, teachers Eric Mailloux and Georgiana Petruta, and the school’s SCA Mr.  Lacroce led students in a project called “The Heart of a Solider.” Students created over 30 sculptures, paintings and posters depicting what it means to wear a uniform for Canada. The artworks were gifted to five military units on the island of Montreal, and the winning sculpture went to the Ste. Anne’s Hospital for veterans on the West Island. Five works of art were named winning creations. https://www.instagram.com/p/CWErI9il8kR/?utm_medium=copy_link

As SCA for FACE School downtown, Elizabeth Pellicone spoke to elementary school students about the origins and significance of the poppy in its 100th year as a symbol for Remembrance Day. Students created their own poppy "bouquets" that they placed at the base of a memorial plaque in the school’s main entrance. The plaque lists the names of students and teachers of Montreal High School, as the school was originally known, who died during World War I.

Students at John Grant High School in Côte St. Luc recognized Remembrance Day with a virtual ceremony including readings from students, a reflection from special guest Major Jawara Hinkson and a moment of silence in which every class sent a representative to lay their class poppy on the school’s wreath. The ceremony was led by SCA Samantha Smith and principal, Jennifer Le Huquet.

Joseph Monachino, Spiritual and Community Animator for Laurier Macdonald High School in St. Leonard, reported that students sold poppies as well as a special jam based on the kind soldiers used to receive in the mail during both world wars. Proceeds were sent to support the local Legion.

Besides participating in the “360 in 60” program and taking a moment of silence, students and staff at Lester B. Pearson High School in Montreal North were treated to a special musical performance by student Giuliano Baril and the school’s SCA, Mr. Monachino. This was an extension of his “Strings to Your Heart,” a project uniting the power of music and its ability to create social connection and belonging. Students also sold poppies, with funds raised going to the local Legion.

Students at both Laurier Macdonald and Lester B. Pearson also wrote postcards to veterans.

Students at LaurenHill Academy in Ville St. Laurent participated in a school-wide virtual Remembrance Day assembly. Under the guidance of SCA Elizabeth Pellicone, students from both campuses volunteered to sing O Canada, recite In Flanders Fields, lay wreaths or explain the significance of the poppy as a symbol for Remembrance Day. Allan Colton, a World War II veteran and now 101 years old, spoke to students live from his living room. Mr. Colton served in Europe for the United States Air Force. He is the great-great uncle of grade 8 student Kennedy Young.

Grade 11 student Aislinn Costa, vice president of LHA Student Council Senior Campus, delivered a message of gratitude to soldiers, veterans and their families and lay a wreath, produced in association with the LHA Knitting Club, on behalf of the student body.

On November 3 and 4, in-person Remembrance Day ceremonies were hosted by Spiritual and Community Animator Rocco Speranza at John F. Kennedy High School in Villeray. A special guest appearance was made by five veterans, among them serving in the Vietnam War and in several UN peacekeeping missions including Bosnia, Kosovo and Haiti. Students also listened to a bagpiper and bugler signal the two minutes of silence. Students Clarissa Grigoropoulo, Alessandro Chiby and Sarah Chiby performed O Canada, Let It Be and Hallelujah. One ceremony was filmed and aired on Remembrance Day.

Under the theme of remembrance, which ran throughout the entire month of November at Outreach High School in the Southwest borough, students participated in a special live virtual event on November 30. Former member of the Canadian Armed Forces and peacekeeper, veteran Paul McMenemy spoke to grade 10 and 11 students. They also received a presentation by their SCA, Ibrahim Abou Arab, about the important roles of peacekeepers, peacemakers and peacebuilders. Outreach students got to hear firsthand from Mr. McMenemy about Canadian contributions to peacemaking, followed by an open Q&A, where students asked many thoughtful questions.

Under the direction of SCA Lacroce, the junior grades at elementary schools Nesbitt in Rosemount and Pierre de Coubertin in St. Leonard created postcards for members of the Canadian Armed Forces who were working overseas, away from home for the holidays.

The senior grades at those schools also welcomed guest speakers Sergeant Washburn and Mr. Stevens, while each had their own special visits from Major Hovig Maghakian; Deputy Commanding Officer of The Black Watch (RHR) of Canada, Corporal Kenton Townsend; and Sergeant Brigitte O’Driscoll.

At Bancroft Elementary School in the Plateau, Ms. Pellicone led a craft activity for students to create poppy “bouquets” which they placed at the base of a paper tree in the main entrance that supports different themes during the year. The children stood at the Bancroft Family Tree for a moment of silence students.

At elementary schools EastHill in RDP and Edward Murphy in Hochelaga-Maisonneuve, under the guidance of SCA Rocco Speranza, children made wreaths and artwork that were placed at the table of honour during a Remembrance Day ceremony. They also presented letters, cards and poems to the veterans who attended the ceremony and mailed postcards with words of gratitude to members of the Royal Canadian Legion and the Ste. Anne’s Hospital for veterans.

SCA Puynung Choy organized both a live interview and a virtual one for her students at Mackay Centre in NDG, Dunrae Gardens Elementary School in TMR and Mountainview School in Côte St. Luc. Students met online with Thomas Irvine, an Infantry and Training Drill Sergeant who served for 23 years with the Black Watch (Royal Highland Regiment) of Canada and in-person with retired Lieutenant Colonel Bob Boutilier, who had 30 years of military experience.

Ribbons from Philip E. Layton and MacKay Centre schools, along with Dunrae Gardens and Coronation were affixed to wreaths that were placed at the cenotaph at Place du Canada in downtown Montreal.

Since 2011, students at Elizabeth Ballantyne Elementary School in Montreal West have spent time with members of the Montreal West United Church Extra Miles senior program during the month of November sharing Remembrance Day projects. This year, Ms. Jessica Doubt spearheaded the school’s participation in the Town of Montreal West’s 100th anniversary of the Canadian Remembrance Poppy project. Grade 5 and 6 students made wreaths and laid them at the base of the Montreal West Cenotaph. The town gave the school a booklet “Their Stories, Commemorating the veterans of Montreal West,” which includes stories about the veterans from Montreal West, where they lived and where they went to school. The West-end intergenerational Network helped to coordinate.

Ms. Poullas also invited Patricia Lattanzio, member of parliament for Saint-Léonard-Saint-Michel and formerly on the EMSB council of commissioners, to Dante and Honoré Mercier elementary schools, both in St. Leonard, to speak at their Remembrance Day ceremonies. The schools were also presented with a memorial wreath as a gift from the prime minister of Canada.

Peace looks like a stream that never stops flowing.

Peace smells like a fresh blanket from the dryer.

Peace sounds like the country when you hear the birds chirping in the morning.

Peace feels like the wind, it makes all the negative things just fly right passed you.

Peace tastes like water, it’s clear but you know it’s there. 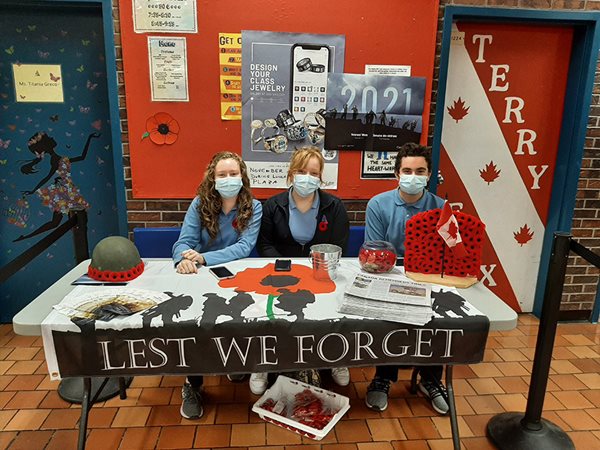 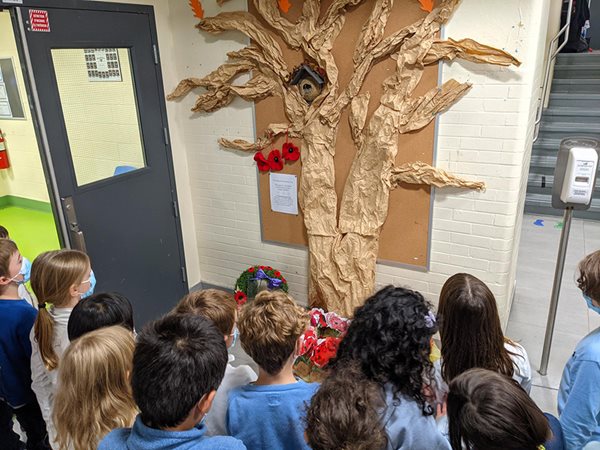 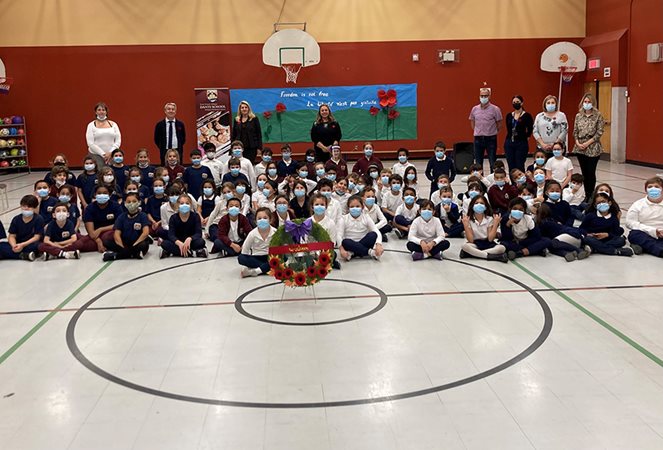 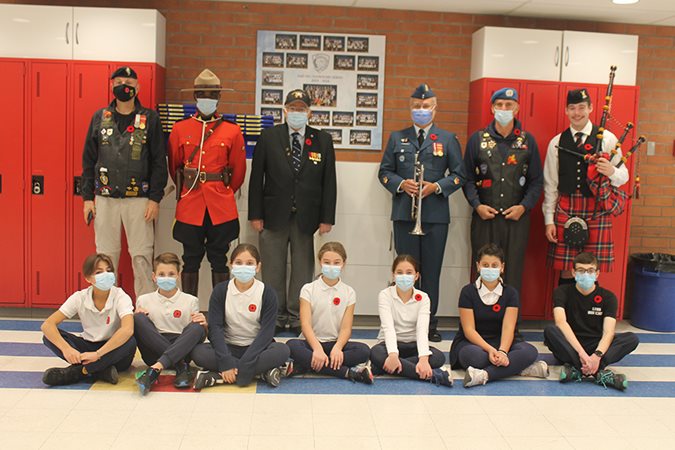 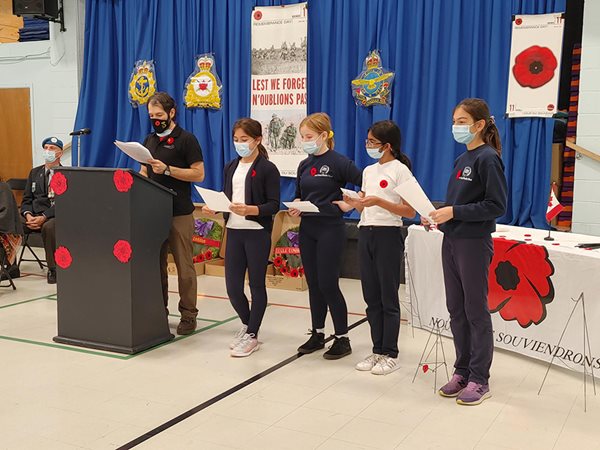 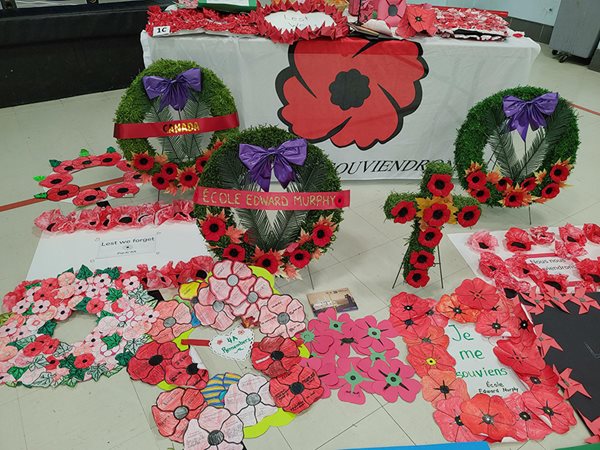 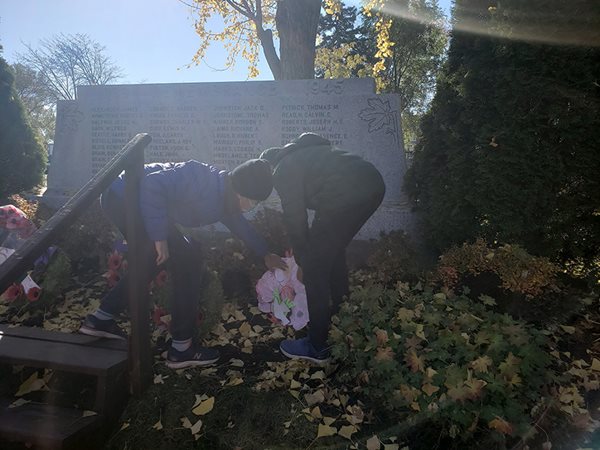 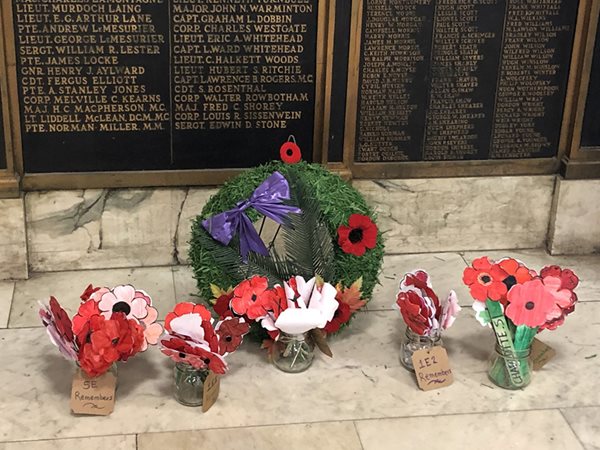 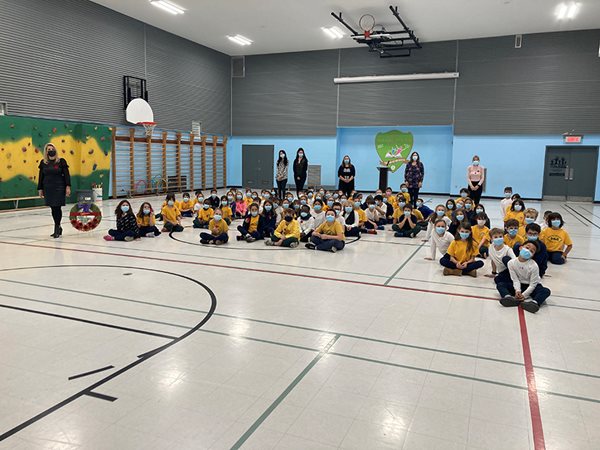 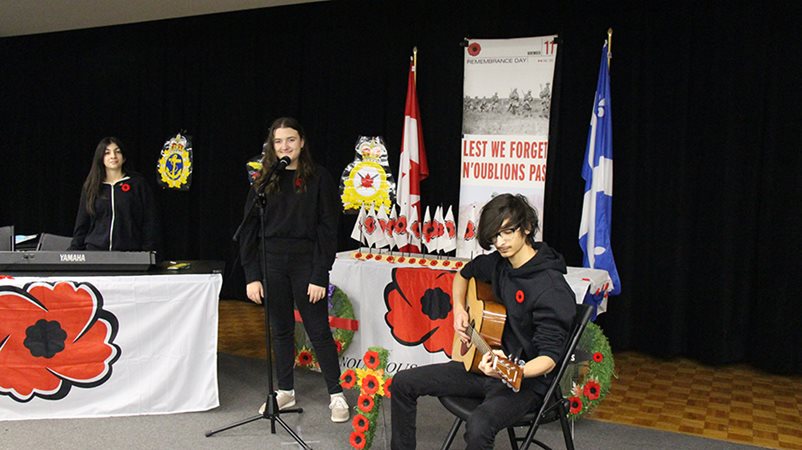 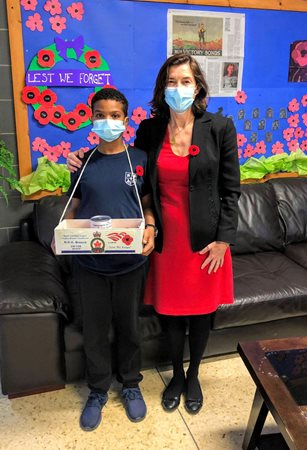 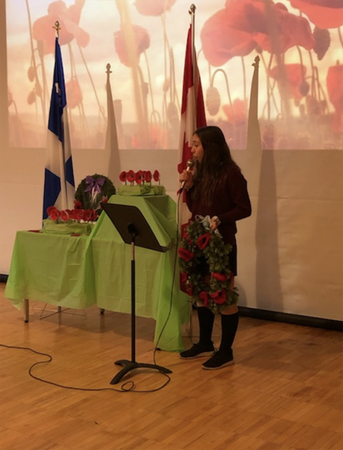 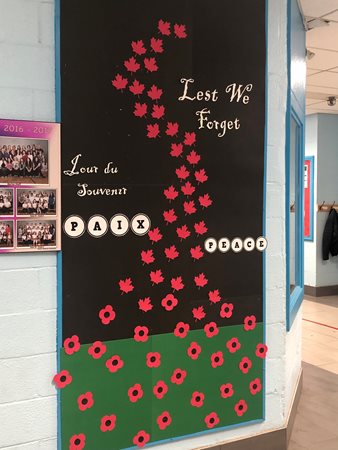 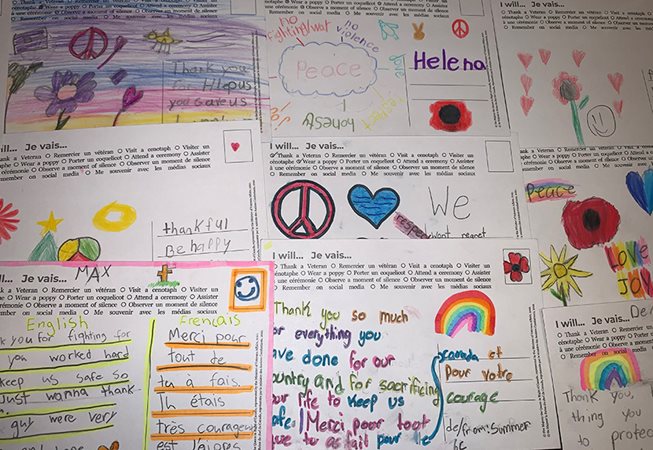 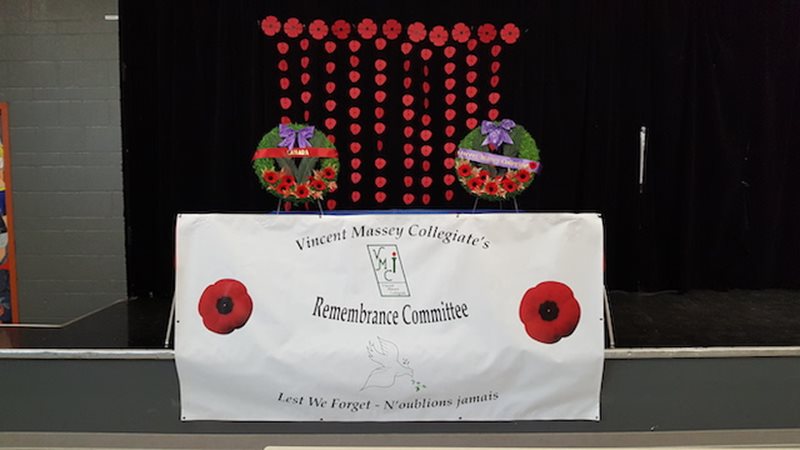